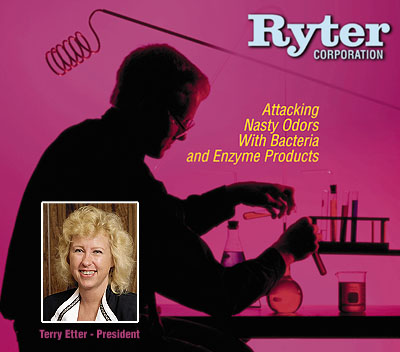 This story is a condensed version from Connect Business Magazine.

There’s nothing more affectionate than a purring kitten settled in your lap, nothing more appealing than a frisky puppy who wants to play. America is a nation of pet-lovers. But, ah, there’s a downside. Pets, uhm, even the best-groomed pets, sometimes create unpleasant odors. So do swine herds, turkey flocks and the mess that’s left after you clean a stringer of walleyes.

The Ryter Corp., tucked away on a side street in a residential area of Madelia, has been erasing odors for four decades, and not just for pet lovers. It also eliminates problems generated by a civilized society: Waste cooking grease, which smells and fouls the drains of restaurants. Solids, which clog septic tanks. Tangles of hair and chunks of soap, which choke the plumbing in homes and apartment complexes.

“The best thing I like about what we do is that our products work hand-in-hand with nature and natural processes,” said Terry Etter, president. “They don’t change the environment. We’re not adversely affecting what our grandchildren are going to grow up in.” Bacteria, which Etter describes as “nature’s housekeepers,” do the work. Where necessary, enzymes speed the cleanup or fracture odor-causing molecules, rendering them harmless.

Etter’s late father, Kenneth, pioneered the use of bacteria and enzymes to destroy odor-causing elements and hasten the natural decay of waste. The company has grown to serve both the pet and sanitation industries with brands that have become known nationally. Just a sampling:

Odormute to erase, not mask, the smells pets leave behind.
Lim’nate to digest dog droppings.
Formula One to consume the contents of drain lines, grease traps and septic systems.
Green Label Quick John for digesting waste in outdoor toilets and for composting any organic material.
Red Label Quick John for septic tanks, cesspools, grease traps, drains and drain lines.
N-Zyme Fresh for odor control anywhere, including food processing plants and sewage lagoons.
Sneaky Pete to speed digestion in municipal sewage systems or in the lines and drains of large hotels, restaurants or manufacturing plants.
“My father had the unusual ability to be able to invent products and market them himself,” Etter said. “But he wanted products to work with nature. He wouldn’t add chemicals or things harmful to our environment.”

Kenneth Etter’s “day job” was with Gland-O-Lac, an agriculture pharmaceutical firm located in Omaha. From his Madelia home, he traveled five states. “In the early 1950s there weren’t the antibiotics or vaccinations for animals that are available today,” Etter said. “He had to actually go diagnose what was wrong with a turkey flock or a herd of pigs. Sometimes it meant dissecting to find out what was wrong.”

Away from his work, Etter seemed drawn to finding solutions for mundane problems the unpleasant odor wafting from cat litter boxes, the rank malodors roiling out of fish-cleaning shacks. Her father loved to fish, and the family had cats. “He felt that if we had a problem, other people had the same problems,” Etter said.

“He looked at decomposing animals and leaves, tried to find a way to isolate whatever caused that decomposition, and then grow it in very high strengths so it would do it more quickly. He’d experiment on pig lots and with cow manure. He’d find a problem to be solved and work on it,” she said. “When I was growing up, we had a 100-gallon drum buried in our backyard. Everything went down there, even watermelon rinds from my birthday parties. That was our test, to see how bacteria worked.”

Etter said her father had help from a variety of sources as he searched for ways to reduce odor and hasten decomposition. Henry Nupson, one of the founders of Minnesota Valley Testing Laboratory in New Ulm, helped him isolate the bacteria linked to decomposition. A brother, Clem, “loaned him money when no one else would,” she said. Gland-O-Lac, meanwhile, “encouraged him to create and invent. He was blessed with a good boss. We still have a ruby ring they gave him for generating $1 million in sales when a million dollars was still really quite something.” Eventually, Gland-O-Lac became one of his first customers, buying his bacteria-based compounds to decompose hog manure.

About 1955, he launched his first product, a blending of bacteria and enzymes known as “Fish-Erase,” marketing it through ads in resort publications. “That was the first product because he was a fisherman. My mother and I were the cat lovers. One of my first jobs was checking off how many responses came from which ad,” Terry said.

In 1957, Kenneth and June incorporated their business, rearranging the letters in “Terry” to name it “Ryter” Corp. They remarketed their original product with a new name, “Fish-Rid,” and it remains a strong seller. Next came “Odormute,” the product which made Ryter a major player in the pet industry. Her father’s challenge in developing it was “to take care of the odor in the cat box, because it was in the house, and not hurt the cat. You don’t want to knock off your cat while getting rid of the odors,” Etter said. To do it, he blended enzymes which break down odor-causing molecules.

Her father, who gave up his “day job” in 1963, developed a technique for growing bacteria which apparently still leads the industry, according to Etter. “Our lifetime average is 65 billion bacteria per gram of matter, which is very high in the industry,” she said. She knows that’s extremely high because once Ryter ran short of product to fill an order and she tried to buy bacteria from competitors with good reputations. “I couldn’t buy anything at 50 billion per gram. All they had was 20 billion. That’s the only reason I know we’re so high,” Etter said. But she doesn’t know why. “The industry is very proprietary about processes and techniques. We’ve changed growing rooms, updated our facilities, and become more sterile, but we’re still doing the same basic process my father did, so it must be something in the way he did it. We sure think so.”

Ryter maintains a close working relationship with Minnesota Valley Testing, which does the company’s quality control tests and provides the bacteria spores for growing. “The spores are our seed,” Etter said. They are mixed with water and food-grade wheat bran, which serves as a nutrient. “Bacteria grows in a bell-shaped curve and the trick is to dry it at the right time, when growth approaches the top of the curve,” she said. The mass of wet, bacteria-laden bran is spread on trays to dry, then scraped into drums. Later, 1,000-pound mixers are used to formulate different products of varying strengths, some with enzymes added to speed decomposition of waste.

“More than half of our sales are in bulk to companies that repackage it or reformulate it for their private labels,” Etter said. “I’d be happy if 80 percent of our business were in bulk because we really are a manufacturer. That’s our business.”

Employment has remained stable in recent years at 14, “but sometimes we hire extra help if we get a big order for something like vacuum cleaner tablets,” Etter said. Employees compress a compound, made to a customer’s specifications, into tablets which can be crushed inside vacuum cleaner bags to kill odors. “It has a special scent we use only for this customer,” Etter said.

Some operations in the plant could be automated, but Etter said the “work ethic” of Ryter employees “is so good that automating just wouldn’t be worth the investment.” Her “newest” employee has been there seven years.

Since all of Ryter’s products are dry compounds, Etter hopes to enliven sales by adding a line of liquid products. “Research has shown that the majority of odor control products are sprayed on or poured on,” she said. “They’re not necessarily better, but they’re more convenient.”

Etter located a firm in St. Louis which has the “technology and expertise for stabilizing bacteria and enzymes in liquid form” to manufacture the line of liquid products she plans to market. It’s an arrangement that will work both ways. “We have the technology in powders and tableting, so we’ll be selling to each other.”

Right now she’s mulling bottle shapes, trigger sprayers and market research, hoping to have the first Ryter liquids available in a few months. The “official introduction” won’t come, however, until the American Pet Products huge trade show in June of 1998. She’s on that organization’s board of directors, which means traveling to New York City six or eight times a year. She also travels around the U.S. to see customers, visit trade shows or lead seminars teaching sales people how bacteria and enzymes work.

“I have the ideal situation,” she said. “I’m my own boss, set my own schedule, work as hard as I want and see definite rewards for what I do. I can work nights or weekends or take Wednesdays off.” She also enjoys living in Madelia, far from the bright lights of New York. “When I was growing up, I thought I wouldn’t want to live in a small town, but now that I’m getting older, I’m getting just the opposite,” she said. “You can see great plays in New York. Living in Madelia, you can drive two hours to Minneapolis and go to great plays. But in Madelia, you can be in the play. You can participate in a small town and what you do makes a difference. In small towns, people care and are generally involved in the community. Everybody waves at each other.”

Etter wants to keep the Ryter Corp. in Madelia. “People in a small town depend on you for a living and I’d like to see it endure,” which might mean passing ownership to her stepchildren or employees. She’s about to turn 50, but said “I don’t see myself retiring in 15 years. Mom is 75 and still working full time.”