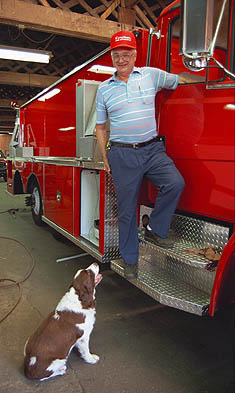 With computers elbowing workers aside and manual labor often reduced to nothing more than pushing buttons, automated production dominates many manufacturing processes today.

But Floyd Forstner and a handful of employees still fashion fire trucks by hand, one at a time, every one different, in an 81 year-old shop on the edge of downtown Madelia. They start with a cab and chassis purchased from a major automotive manufacturer and custom-build the rest. The first truck born in that shop in 1940 still sees limited service with the Madelia Fire Dept.

The mass-produced, one-size-fits-all concept just doesn’t apply to equipment destined to satisfy the exacting specifications of individual fire departments in several states. “We cater to the wishes of the fire departments and we don’t try to push anything down their throats,” Forstner said. “Some trucks are quite similar, but no two are exactly alike. There may be differences in the arrangement of compartments, for example, or the kinds of ladders.”

In 1957, Forstner bought Forstner Fire Apparatus, Inc., from his father, Henry Forstner, and his uncle, Theodore Forstner, who started the company in 1940. “They were both on the Madelia Fire Dept. and when the town needed a new fire truck back in 1940, they had some definite ideas about what they wanted. The town didn’t have a lot of money, so they built it themselves.”

Henry and Theodore possessed the skills, equipment and space to build that first truck because “they were in the garage business. They sold Hudsons and Studebakers, repaired cars and had a welding business,” Forstner said. Hudson and Studebaker disappeared from the American automotive scene long ago, but the Forstners kept right on assembling fire trucks in the narrow brick building they’d put up for their auto dealership in 1917.

Apparently pleased with their first effort, the Forstner brothers built three more in 1941 for fire departments in Springfield, Good Thunder and Stewartville. However, the new company’s momentum stopped Dec. 7, 1941, when the U.S. entered World War II. “During the war the business was quite dormant because they couldn’t get materials, but they did some refurbishing and repairing of fire trucks,” Forstner said. They also assembled two trucks for Little Canada, a St. Paul suburb, each built with used pumps installed on a secondhand chassis.

With the war over, the brothers resumed production of new fire trucks in 1946. Forstner figures his father and uncle built 250 before he purchased the business in 1957, and estimates that he’s produced another 500. Most are sold to fire departments in Minnesota or North Dakota, although a few go to South Dakota and Iowa.

Forstner began working in the shop when he graduated from Madelia High School in 1948, then joined the Air Force in 1950. He returned to the company in 1955 “doing a little bit of everything, mostly assembly work. Before taking over, he learned the intricacies of bidding, writing specifications and sales from his father. Designing the trucks seemed to come naturally. “I enjoy coming up with new ideas,” he said.

Forstner generally has two units in various stages of construction at the same time. “That’s all we have space for in here,” he said. In mid-September, the Forstners were building a one-ton utility truck for fighting grass fires at Epping, ND., and a 3,000-gallon tanker for Lonsdale, MN. The Lonsdale tanker is one of the largest they’ve built. “That’s about as much water as a truck can carry,” he said. Waiting in line behind the Epping and Lonsdale trucks was a new chassis to be converted into another one-ton utility unit for firemen in Lafayette, MN.

The shop is full of machinery for cutting, bending and welding the 1/8th-inch steel that forms most of the bodies, although some are now built of aluminum too. A long paint booth devours one corner. Forstner’s office occupies another corner, where he works hemmed in by an old wooden desk and two steel desks, each covered with stacks of parts manuals and product catalogues. “There’s not room in here for a fax machine,” he said, so when he needs to send or receive a fax, he walks to a nearby office supply store.

An aging manual portable typewriter with round keys sits on the corner of one desk. “I just use that to address envelopes,” he said. In the middle of the tiny space surrounded by the desks is his drafting board and T-square, where he designs the trucks. “I don’t use that computer-aided design stuff,” he said. “I’m kind of old to be learning new tricks. I’ll leave that to my boys.” His two sons, Gary, 43, and Vince, 36, work with him and he says they’ll carry on the business when he retires. “I’m getting toward retirement age. I’ll be 68 in November. I’m slowing down, but I wouldn’t want to quit entirely,” he said.

Just outside his door, Vince’s wife, Kristi, works in a closet-size space nearly as crowded as his office, but she enjoys a bit of modern technology, an older Apple computer. She uses it for writing checks and keeping payroll and financial records. Forstner keeps a second Apple tucked away in a metal cabinet, using it to write letters, produce business forms and work with specifications for the fire trucks.

“One thing we’re really short of is office space,” Forstner said, squeezing through the single opening between his three desks. That may be solved by an expansion Forstner and his sons are contemplating. They’ve bought some adjacent property and “we’re playing with the idea of building on in the next couple of years. We have 9,500 square feet now and we could come pretty close to doubling that,” he said. They’re also weighing the possibility of building an entirely new facility, but the attractiveness of that idea is diminished because it would mean replacing two expensive assets. One is a 10,000-gallon cistern buried beneath the shop floor. They draw water from it to test the plumbing on trucks, then pump it back into the cistern. Another is the paint booth Forstner built in the 1970, although he admits they might be outgrowing it. “It was huge when we built it, but now the trucks are getting bigger and they fill it up,” he said.

Although fire trucks are traditionally red, trucks painted in variety of colors began emerging from that paint booth in the 1970s-yellow, white, lime green and orange. “Red used to be the only color, but some departments went to lighter colors because red doesn’t show up well in the dark. But people don’t associate those other colors with fire trucks as much,” he said. “Ask any little child what color a fire truck is and they’ll say red.” But, in keeping with his philosophy of providing what firemen want, Forstner paints any hue they order.

“The trucks have changed an awful lot over the years. They’re getting bigger and bigger with a lot more sophisticated equipment – foam systems, electrical systems, lighting equipment for illuminating the fire scene, carrying their own power generators,” he said. “There’s just a lot more equipment on them all the way around. A lot of them carry hydraulic rescue tools, because fire trucks have become more dual purpose, making not just fire calls but accident calls.” As a way of compensating for the extra weight of the added equipment, the company now installs plastic water tanks rather than steel.

Forstner enjoys the challenge of fitting into a truck all the equipment a department wants, which means designing special compartments and sometimes involves creative solutions. One of his favorite “new ideas” was a hydraulic tip-down unit which allowed ladders to be carried atop a truck, then be moved down to the side for easy removal.

Forstner’s half-dozen employees are “always busy. They get to be jack-of-all trades, welding, cutting and bending steel, doing the wiring, the painting, the plumbing. There’s a lot of pipes running around those trucks.” They also keep busy providing maintenance and repair services. “If the departments are close by, they’ll bring their trucks in,” Forstner said. “If they’re far away, we’ll go right out. We have quite a few towns in North Dakota where we make annual service trips. Gary does a lot of that work. He’ll go out for a week at a time. We offer that and quite a few towns take us up on it. It’s a good program because we can catch any problems before they become big problems.”

Although he hopes to replace a retired salesman who sold their trucks in North Dakota and Northwestern Minnesota, Forstner said the company has no aggressive marketing effort. “The biggest share is repeat business. We’ll get a call from a fire department, and I’ll go meet with them and help them set up the specifications for the type of equipment they want,” Forstner said. “Then we have to bid it.” The company wins about one contract for every five bids it makes. “Our trucks have a reputation for being well-built, but they’re not cheap,” he said. “There’s a lot more fire equipment companies building fire trucks these days. The biggest share used to be manufactured in Minnesota or close by, but now they come in from all over the U.S.”

This increased competition is just another in a series of humps Forstner has surmounted since 1957. “There’s always something. During the Vietnam war, we had a hard time getting materials. Some types of steel were in short supply,” he said. In the late 1970s and early 1980s, inflation made bidding difficult. “We had quite a backlog of work, and the price of everything escalated so fast.”

There’s a great difference in the price of today’s trucks, and it’s not all because of inflation. Forstner poked into his records to find the price (to the penny) that Madelia paid for the minimally equipped 500-gallon pumper in 1940. It was $4,148.40, which included $1,426.67 for the chassis and $2,721.73 for the custom body with pump, apparatus and ladders. The last unit delivered to Madelia in 1993 was a 1,250-gallon pumper which cost $105,000, “but it was completely equipped with everything – breathing masks, hoses, ladders, axes, everything.”