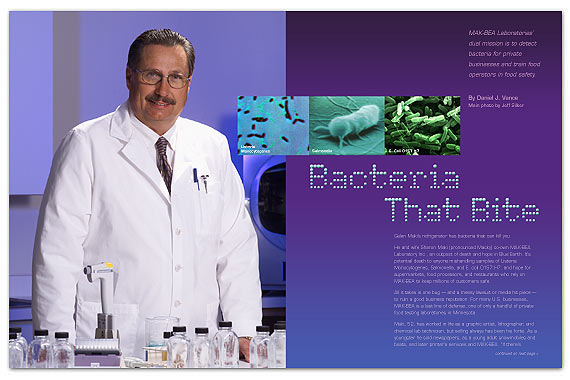 Galen Maki’s refrigerator has bacteria that can kill you.

He and wife Sharon Maki (pronounced Macky) co-own MAK-BEA Laboratory Inc., an outpost of death and hope in Blue Earth. It’s potential death to anyone mishandling samples of Listeria Monocytogenes, Salmonella, and E. coli 0157:H7; and hope for supermarkets, food processors, and restaurants who rely on MAK-BEA to keep millions of customers safe.

All it takes is one bug — and a messy lawsuit or media hit piece — to ruin a good business reputation. For many U.S. businesses, MAK-BEA is a last line of defense, one of only a handful of private food testing laboratories in Minnesota.

Maki, 52, has worked in life as a graphic artist, lithographer, and chemical lab technician, but selling always has been his forte. As a youngster he sold newspapers, as a young adult snowmobiles and boats, and later printer’s services and MAK-BEA. “If there’s anything to sell, I can sell it,” he said. And he has squeezed every ounce out of his resume—the graphic arts, printing, lab work and sales—to help MAK-BEA succeed.

Early in life he faced tough times. “I grew up in northern Minnesota,” he said as if he didn’t have to explain his upbringing any further. “My dad worked mining and construction. He also owned a company that kept right of ways for power lines clear of trees. My parents owned 120 acres of timber, so we logged in summers when things slowed.” The ups and downs of the taconite industry created plenty of slow summers for his family. “I never went hungry, but I know there were times when there wasn’t a dime in the house.”

In 1971 he graduated as a graphic arts major from Range Community Technical College in Virginia, Minn., and immediately took work outside his field as a lab technician with Reserve Mining Company. The paychecks lasted ten years until Reserve went belly-up in 1983 when Maki turned 31.

So what would Galen do?

“I gave up on northern Minnesota,” he sighed. “Everything died. I lived in Silver Bay, a beautiful town, and I had a beautiful home. It took a couple of years for the home to sell, and I lost perhaps $20,000. There were people who lost more.”

He found work in the Cities with a printer doing sales and marketing. He’d been a lithographer while in college, so it fit. In 1987, he heard that Blue Earth Graphics, part of Central Graphics, a printer in Blue Earth, was looking for a manager to run its “sheet-fed” side. He was hired, then after marrying a Blue Earth native he made a career change. In 1990, a nearby food testing laboratory hired him as a salesman to set up food safety programs with supermarkets, and in time he would work the lab part-time. Blue Earth seemed like a place where he could settle down for life.

That is, until they shut down the Blue Earth branch.

“I’d helped the company develop a stable sales base,” he said. “However, in 1992 their Twin Cities lab lost a major client. Since the owners lived up there, they shut down this lab and relocated everything there.”

It was the Iron Range all over again. Moving to Minneapolis was out of the question because he loved Blue Earth, felt settled, and it was his wife’s and in-laws’ home. From this uncertainty emerged a plan: he would start his own testing lab.

He opened shop July 1, 1993. “Some of my old clients chose to remain working with me,” he said. “Enough came on to keep the new company going. 1993 was a tough year. We lived off a lot of credit cards until we built a base.”

1993 and 1994 were also learning years. MAK-BEA hired and trained a microbiologist, purchased equipment, satisfied agencies, met government certifications, and found office space. The learning curve was steep, but its resources met the challenge. The Makis had a working business partner, Sandra Beatty, who had been the health inspector for Martin and Faribault Counties. The BEA in MAK-BEA comes from BEAtty. After some personal health issues, Beatty and her husband sold their shares to the Makis in 2001. Since then the 12-employee business has continued to grow steadily, and its customer base now includes supermarkets Lund’s, Cooper’s, and County Market, and food processors including Tony Downs Foods of St. James.

At times MAK-BEA Laboratories has found positive bacteria once a week over several weeks, but it also has gone months not finding any pathogens. The frequency, Maki claimed, often depends on employee training. Most fecal contamination occurs when employees forget to wash their hands after using the restroom. “Then you become ill,” said Maki, “and it is not the 24-hour bug making you ill because there is no such thing. It is foodborne illness, probably from something you ate within the last three days.” Most people with a foodborne illness blame the food they just ate because it’s the last meal they remember. But Maki said food eaten up to 50 days ago can cause illness today.

“Clients have my home telephone number,” he said. “They can call anytime, and sometimes do, even two in the morning. Calls that late usually relate to something that just happened at a food processing plant or restaurant, and they ask what I would do. I may walk them through a checklist that involves resanitizing and other quality assurance measures before they can start back up.”

When MAK-BEA says you have bugs, you likely have them. There is no room for error, Maki said. The Marketing Council of Independent Labs regularly sends samples to MAK-BEA for testing—some with salmonella, listeria, and e-coli, and some without—and the company is almost always 100 percent accurate.

In supermarkets, potato salad is a possible breeding ground because it often contains egg, and egg can have salmonella; and potatos can pick up e-coli from fertilizer. The making of potato salad also involves a lot of hand contact: the processor ships the product in 5-20 pound buckets, and retail personnel must fill by hand smaller containers for display in the service case. Other trouble foods are sliced turkey and roast beef because they touch a slicer. “Bacteria can grow on a slicer because it’s at room temperature,” Maki said. “It starts growing over 40 degrees, and every 20 minutes the amount of bacteria can double. It doesn’t take much to make you sick.”

“I met my wife Sharon in 1987 at Central Graphics in Blue Earth,” said Galen Maki, co-owner with Sharon of MAK-BEA Laboratories. “She was secretary to Gary Lemon, the president of Central Graphics. She knocked me off my feet our first meeting. I was going through a doorway, she was headed the same way, and we bopped heads. That was the first time we met. So she literally bowled me over. We laugh about it now. Sixteen months later we married.” Sharon oversees personnel, human resources, and book work for the 12-employee company. One key employee is a microbiologist that manages the lab and processes tested product.

MAK-BEA is an independent food testing lab —not a government agency. It confidentially tests food and food contact surfaces for supermarkets, restaurants and food processors across the nation. In essence, it acts as a company’s private “health official.” Maki said, “Sometimes it can be difficult dealing with government. Some of our customers don’t want the government seeing any dirty laundry they might have. So they hire us before that happens.”

“We’ve done food safety training for almost every restaurant from Worthington to Rochester,” Maki said. “Our training serves another purpose in introducing businesses to our testing services.”

By law a food retail operator must always have at least one certified person on duty.

Food safety training accounts for 20 percent of MAK-BEA’s revenues, and testing the rest. For southern Minnesota clients the company has a state-of-the-art training facility in Blue Earth frequented by about 100 trainees a year. Maki said that training increases a company’s profits because from it the client develops better controls resulting in less food waste. “It pays for itself every month,” he said. Training that teaches correct cleaning techniques, sanitizer use, and product temperature knowledge can lead to longer shelf life, less shrink, more profits—and better tasting product for customers.

It Drives Him Buggy

Many large food processors have in-house labs, but most won’t test for the really nasty bacteria for safety reasons. It can be quite dangerous. So food processors hire MAK-BEA to do their testing. Maki said, “Our live cell cultures are stored behind a locked door in a refrigerator. We have to grow the bacteria for positive control. We run negative controls during testing to make sure everything is working correctly. Once we’re done with the test tubes, all live bacteria is killed off inside an autoclave unit that produces 270 degrees at 15 pounds of pressure for 20 minutes.”