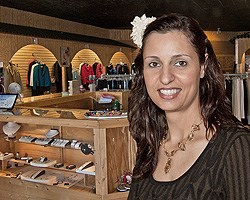 While growing up in Amman, Jordan, Alia Bostaji (Bose-tah-gee) enjoyed watching her aunt manage a home-based artwork business. It seemed intriguing. But Alia’s father had other ideas.

“Where I come from, having a professional job was much more prestigious,” said 33-year-old Bostaji in a Connect Business Magazine telephone interview. “My dad wanted me to be a banker. So I studied accounting and became a banker.”

In 1999, she married, and in 2002 moved along with her husband to Montreal, Canada, where earlier he had earned an engineering degree and found work. Within a few years, her husband’s employer went bankrupt. He tried starting his own business, but his lack of fluency in French became problematic. The solution was a job offer in 2006 with S-T Industries in St. James.

Said Bostaji, “I was shocked at first how small St. James was—it wasn’t Montreal. I had never seen so many cornfields in my life.”

After having her third child, over time, she became restless about working again. Her husband suggested banking. Then, to help out a friend, she began selling crystal bracelets to raise funds for a local cancer support group. One thing led to another, and before long Bostaji was organizing the “Marketplace of St. James,” a monthly gathering of home-based businesses and community crafters and artists.

She said, “What I enjoy most about my business is seeing and caring for people. I really enjoy people—talking and connecting. It’s all about personal relationships.”

One thought on “Chez Alia Outlet”