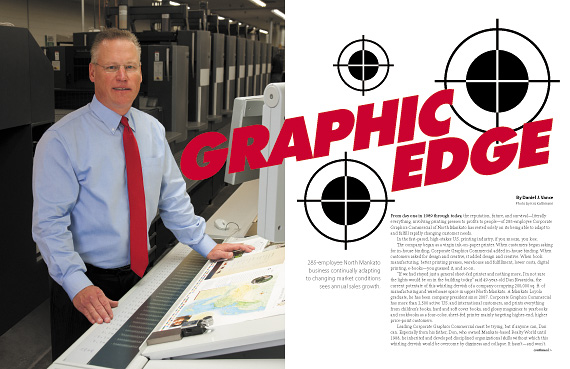 From day one in 1989 through today, the reputation, future, and survival—literally everything, involving printing presses to profits to people—of 285-employee Corporate Graphics Commercial of North Mankato has rested solely on its being able to adapt to and fulfill rapidly changing customer needs.

In the fast-paced, high-stakes U.S. printing industry, if you snooze, you lose.

The company began as a virgin ink-on-paper printer. When customers began asking for in-house binding, Corporate Graphics Commercial added in-house binding. When customers asked for design and creative, it added design and creative. When book manufacturing, better printing presses, warehouse and fulfillment, lower costs, digital printing, e-books—you guessed it, and so on.

“If we had stayed just a general sheet-fed printer and nothing more, I’m not sure the lights would be on in the building today,” said 49-year-old Dan Kvasnicka, the current potentate of this whirling dervish of a company occupying 200,000 sq. ft. of manufacturing and warehouse space in upper North Mankato. A Mankato Loyola graduate, he has been company president since 2007. Corporate Graphics Commercial has more than 2,500 active U.S. and international customers, and prints everything from children’s books, hard and soft cover books, and glossy magazines to yearbooks and cookbooks as a four-color, sheet-fed printer mainly targeting higher-end, higher price-point customers.

Leading Corporate Graphics Commercial must be trying, but if anyone can, Dan can. Especially from his father, Don, who owned Mankato-based Realty World until 1988, he inherited and developed disciplined organizational skills without which this whirling dervish would be overcome by dizziness and collapse. It hasn’t—and won’t.

The Kvasnicka family had six children, with Dan fifth in the pecking order after two older brothers and two older sisters. They moved from Gaylord to Mankato early on.

Said Kvasnicka, “There were definitely pros and cons of growing up in a large family, but the most challenging aspect at times was our financial situation. My dad started up a real estate company in 1970 (Kvasnicka Realty, which later became Realty World) during a very tough time economically and he fought through the wars. He sold the company to Atwood Realty in 1988, after which he worked for Atwood Realty.”

His father was “very, very disciplined in his business approach,” said Kvasnicka, emphasizing a real estate office “meticulously” managed with a Realtor checklist of moving a home from listing to sales that had to be followed on every point. There were no exceptions. It was the way his father ran their home, too.

From an early age—he was seven when his father started Kvasnicka Realty—Dan began helping clean his father’s office on Sunday nights and doing other odd jobs like mowing the storefront lawn and shoveling the sidewalk. He eventually helped haul trash from foreclosed property and placed realty signs around town. The entire family participated as a team and everyone pulled their weight. The work ethic developed combined with family expectations eventually led to all six Kvasnicka children graduating from high school and college, with Dan passing through Mankato Loyola, then one year at Minnesota State, and in 1986 finishing up at the College of St. Thomas with an accounting degree.

It would take him ten years to pay off his college debt, he said, but “the whole process paid life dividends.” His older brother Dave had pointed him towards accounting.

“It’s the language of business,” he said. “My accounting background certainly helps when I look down a profit and loss statement. We run a business here. We have to make money. We have to continually reinvest our profits back into the company to hire new employees, expand market channels or buy capital equipment.”

In 1988, Kvasnicka’s career path went off on a tangent. He was 25 years old by then, had been working two years as a public accountant for Wolf Etter in Mankato, and had thoughts of pursuing taking over Realty World from his father. That is, until his father sold Realty World. The sale hadn’t come as a complete surprise because father and son had hashed through the difficult decision on many occasions. It was the result of a number of different factors, including Dan not being ready to take over and unsure about what he wanted out of life. It was a difficult situation because Dan and his father had to detach from their feelings and logically do what was best in terms of the employees and the business. Dan had literally grown up with the company, had an emotional bond, and with his mother and father had been through the ups and downs.

“One thing I’ve learned over my life and business career, is that the quicker you can move personal feelings away from a business decision, much of the gray areas in it can be removed,” he said. “I never want to get rid of the personal side of evaluating business situations because in business relationships are king, whether that’s with an hourly employee on the floor or a hard-charging manager pushing for change or a customer challenged by our services. But you have to make sure you control your emotions and personal feelings in order to make good, fundamental business decisions for the long-term good of the company. And it’s tough to do that at times.”

Kvasnicka said having Taylor Corporation as a holding company gave leaders at companies like Corporate Graphics Commercial (which had just began in 1989) the time to focus on day-to-day manufacturing operations and create a vision for taking the company into the future. Corporate Graphics Commercial itself didn’t have to fuss with accounts payable, accounting, legal, taxes, and treasury—all those services and more Taylor Corporation provided. All they had to worry about was pleasing customers, taking a business from point A to B and on, and meeting certain financial metrics during the fiscal year.

While with Taylor Corporation, Kvasnicka was assigned to the Corporate Graphics Commercial account and developed a business relationship with then-President Joe Keenan, a fellow Mankato Loyola graduate. In 1995, Kvasnicka accepted a position under Tom Holmstrom as controller of a Taylor marketing and distribution company, St. Paul Book & Stationery. (“Like Joe Keenan, Tom was a great mentor,” he said). He temporarily left the Taylor Corporation umbrella when Corporate Express bought out the business in the late ‘90s. But it was Joe Keenan who wooed Kvasnicka back to Corporate Graphics in 1999 as vice president of operations—and in 2007, Kvasnicka was named president.

One revenue stream comes from photography studios that visit schools to sell yearbooks printed at Corporate Graphics. A growing business for years, children’s books, involves taking publisher content and reducing it to ink and paper. The company also has entered the emerging digital age and e-book services. Print-on demand books will be the next wave.

The company has faced unique competitive pressures the last ten years or so. It began with the emergence of the Internet and certain Internet-based companies that would buy open printing capacity and sell that capacity online to print buyers seeking inexpensive printing. Said Kvasnicka, “The big threat with this was that it was a race to the bottom going through these large organizations. The print buyers would go through them to spot buy on open capacity and take the price point way down. We couldn’t compete with them on price.”

Then overseas printers began low-balling children’s books, which affected the company. But overseas printers, though low-priced, have had challenges matching U.S. service levels and physically delivering product on time.

Kvasnicka said, “We do more than just place ink on paper and have differentiated ourselves from most domestic and overseas competitors. What makes us different is we listen to customer needs and try to understand their markets and where those markets are heading. And then we respond. With children’s books, for example, we started out as a printer only. Then we had customers asking for in-house binding services, which we added. Then they wanted design and creative, which we added. Now when the finished book is done, we can ship it to their warehouse or our own. Customers wanted shipping and fulfillment services. The trend now is for e-books and we now help clients create them. Print-on-demand services will be next. We are investing in digital presses. Short run one-off equipment is definitely part of our future.”

He said the whole digital world has changed. The Internet is now a pipeline to transport books. For yearbook customers, the company offers easy-to-use, cloud-based software to help clients build their own books. All these changes and adaptations to changing market conditions and more have been the driving force for sales doubling over the last ten years and sales growth each year since 2007, when Kvasnicka became president.

He maintains a footprint on operations by walking the plant floor up to half an hour daily. “It’s one of the best parts of my day,” he said. “The education I get from the floor is unbelievable. I talk to employees and run into customers or see their projects on the floor. There are so many ahas! I catch on these walk throughs.”

Much of what he learned from his family growing up and their family business, Realty World, has carried over to Corporate Graphics Commercial. For one, he learned growing up how to work with others and how to share the success—and also the importance of everyone carrying their own weight.

“The biggest difference between my family growing up and here is that here we are a much larger family,” he said. “We aren’t blood related, of course, but our 285 employees are a family. Our culture is different from that of other manufacturing facilities in the Mankato area. We have a lot of long-term employees dedicated to doing their best for our company and customers.”

And those employees have a say in the company. Kvasnicka especially likes and respects managers who aren’t afraid to challenge the status quo. For example, he has opinions about what certain employees can accomplish on various pieces of equipment and his supervisors have theirs. Ultimately, he has the final word, of course. The company has an “open door” policy that allows any employee the right to come talk over any issue. Firing an employee, he said, has been one of the tougher aspects of his job and occurs only after going through a detailed checklist to determine exactly what occurred—a checklist similar to what his father had at Realty World.

Given the chronic company condition of always having to adapt to and fulfill rapidly changing customer needs, Kvasnicka, looking inward, realizes he doesn’t have the ability to handle everything himself. “I’ve surrounded myself with great leaders,” he said. “I think I have a strength in accounting, but I need help in other areas, for example, in human resources. I’d like to know everything, but I’m realistic enough to know I don’t.”

What he enjoys most about his job has been his personal ties with customers and employees, and, oddly enough, receiving his monthly financial statement. He said, “I’m here to make sure we’re driving profits to the bottom line. I thrive on the monthly financial statement. We have to drive profitable sales through—and we have a long history of growing sales and growing them profitably.”

CONNECT: What else do you enjoy about your job?
KVASNICKA: What’s near and dear to our employees is hearing positive comments. Taylor gives us a monthly report card and our employees hear portions of it. OSHA was in here last month for the second time in three years and gave Corporate Graphics zero violations. That’s unheard of in the printing industry.

According to its website, Corporate Graphics Commercial offers a wide range of printing-affiliated services, such as: