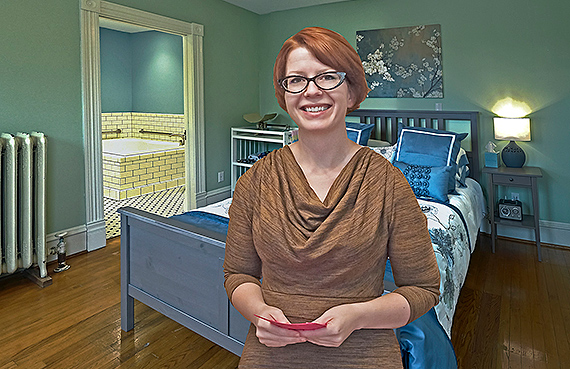 The daughter of two schoolteachers, 33-year-old Erika Urban is carrying on a family tradition. Rather than music and social studies, like her parents, her “teaching” involves helping women give birth to healthier babies. She opened River Valley Birth Center in March.

In a Connect Business Magazine interview, she said, “My parents were also teachers of mine—and they made sure I stayed on task all the time.” After graduating from BOLD High (Olivia, Minn.) in 1999, she moved to Southern California, and over the next six years married a sailor, joined the Army National Guard, worked in a coffee shop, attended college, and began having the first two of four children.

“I tend to be a little bit of a workaholic,” she said.

In 2005, while in Oregon, she began working as a doula (a birth labor assistant). A year later, she started midwifery studies. She said, “We chose to have our second baby at home and when I saw the work our midwife did, I knew that’s what I wanted to do.”

After passing the Minnesota board exam in 2009 and becoming a midwife, she opened in March 2014 southern Minnesota’s first and only freestanding birth center. At River Valley Birth Center, part of what she does is prenatal education, spending 30-60 minutes per appointment teaching clients about pregnancy and birth processes, available tests, nutrition, and occupational and health risks. She begins seeing clients about the twelfth week. Her clients give birth in her birth center or at home. She also does post-partum education.

Insurance often gets billed up to $7-10k for a full slate of care. For people without insurance and paying in advance, she offers discounts. River Valley Birth Center is accredited and licensed, and most moms head home with baby within six hours after birth.

She said, “I really like working through problems with a new mom to help her get off to the best start she can.”