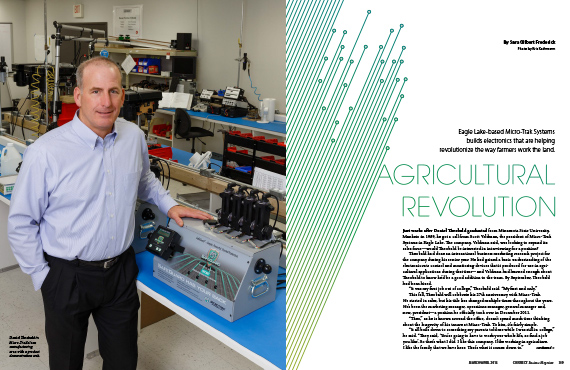 Just weeks after Daniel Theobald graduated from Minnesota State University, Mankato in 1989, he got a call from Scott Veldman, the president of Micro-Trak Systems in Eagle Lake. The company, Veldman said, was looking to expand its sales force—would Theobald be interested in interviewing for a position?

Bill Soderlund was sitting with more than 120 other pharmacy students in a lecture hall at Drake University in Des Moines, Iowa, when the professor posed a question: How many of you, he asked, are planning to own and operate your own pharmacies when you finish your degree.

The orange tuxedo—complete with top hat, cane and shiny shoes—is a dead ringer for the one Jim Carrey wore in the movie Dumb and Dumber. But when Tom Fallenstein puts it on to conduct a tour of Costumes Galore, his 9,000-square-foot business in downtown Mankato, the suit is the only similarity to Carrey’s ridiculously stupid character.

At 25, Fallenstein is president and CEO of a company doing more than $2 million in sales in 2006, including $1 million in October alone. Almost 99 percent of that business was conducted online, not out of the storefront he and his family operate on the south end of Mankato’s Front Street. And therein lies Fallenstein’s genius: He’s figured out how to work the Web.

It was their wedding day—May 15, 1993—and everyone was at their home in Mankato having a good time. Then the phone rang and interrupted their party.

“It was the American Legion,” Lee Bohrer remembers. “They had a wedding of their own going on there, but they were having some problems with their drains. I looked at Kris, and she said, ‘You gotta go.’”

It’s a blazing hot summer afternoon. Not a single cloud in the sky and not even the tiniest hint of relief in the thick breeze moving through the air. Outside the door of a pole barn on the shadeless side of Valley Street in New Ulm, temperatures are soaring above 90 degrees. But inside the barn, which serves as Jeremy Drexler’s shop, it is comfortably cool.

As Brian Nutter stands amid huge flasks of raw oil, explaining how the vapors from each are separated and collected in the distillery set up along the wall, he swears that what he and his colleagues at Elysian-based Nu-Chek Prep do is not as complicated as it looks.

It’s easy to understand why Barb Haroldson regrets being confined to her office on the second level of 16 North Minnesota Street in New Ulm.

Downstairs, the rich aroma of hot coffee lingers in the air; the warmth of hot ovens filters through the space, mingling with the pleasant chitchat stretching from one end of the building to the next. Soft chairs and sturdy tables encourage friendly conversations over a wasabi chicken salad or a cup of Hungarian mushroom soup. The European street scenes painted along the walls provide a brief interlude from a gray winter day in southern Minnesota. And the customers come and go with cheerful greetings for the familiar faces behind the counters.

Last fall, some friends in Bob Coughlan’s ballroom dancing class mentioned they were taking a weekend trip to Philadelphia for a teacher’s conference. Coughlan, the great-grandson of T.R. Coughlan, who founded Mankato Kasota Stone in 1885, immediately offered his input on the couple’s itinerary while in the city of brotherly love.

“If you’re going to Philly, you have to go see the Philadelphia Museum of Art,” he told the couple. “My grandfather supplied the stone for that building.”

Pam and Roger Barnlund are up and ready for the first walk of the day. They wake the dogs—today there are only 12, but there could be up to 30—and start out with one on each of their arms. It takes an hour to give all of them a brisk morning romp.