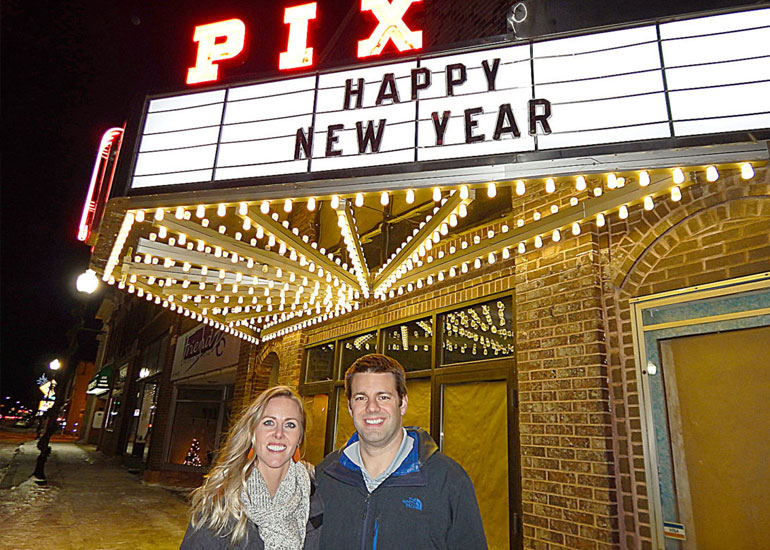 Sleepy Eye Coffee Company and Sleepy Eye Brewing Company are both located in the newly restored PIX Theater building with a rehabbed marquee. Pictured here are Karlyn and Adam Armbruster.

When Kurk Kramer moved to Sleepy Eye 23 years ago to teach in the middle school, he did not envision himself being asked to change careers 13 years later. He did accept the offer, however, and in 2009 he took on the responsibilities of the coordinator of the Sleepy Eye Economic Development Authority. Kramer, along with the EDA board, has been revitalizing the business community in innovative ways ever since, preparing and encouraging young people to remain in Sleepy Eye or to return to their hometown for employment or to become hometown entrepreneurs.

Like many small cities, Sleepy Eye’s population of 3,600 had seen a decline in businesses, especially on Main Street, with stores and restaurants closing their doors. People left the community, either to find a job or to attend college, and they seldom returned. After last year’s closing of Del Monte’s corn and pea canning facility, which was the largest in the United States, many Sleepy Eye residents wondered what might happen next. Kramer recently announced that the Del Monte property has been sold, and the community has been waiting to hear what will become of the facility and the property.

Kramer’s vision as the EDA coordinator has been to revitalize the downtown area, as well as to maintain the larger businesses that have been based in Sleepy Eye for years. One example is Haala Industries, which began as a welding shop and now uses robotics to produce metal products for engineering firms and government agencies.

Kramer’s goal includes having a younger workforce available to employers. To achieve this goal, he called upon his background in education to create economic opportunities that would encourage young adults to work and live in Sleepy Eye, either as business owners or as valued employees. Working closely with EDA board members, he established an on-the-job training program with the two high schools in Sleepy Eye: Southeast High School and St. Mary‘s High School.

Kramer explains, “The angle I have had was using my experience in education and seeing the needs in the business community. We put students through three hours of training under this program, including an employment interview, then followed by real experience in a job. I started with four students and four businesses – South Point Federal Credit Union, First Security Bank, Southeast Medical Center and BIC Graphics – all of which are still participating in the program. This school year, there are more than 20 businesses and 30 students involved.”

A measure of the program’s success is that some of the students who took part in the first few years of the OJT program now are employed by the businesses in which they interned. Others have returned to Sleepy Eye to establish their own businesses. The downtown area now includes insurance agencies, financial investment planners, attorneys, the Sleepy Eye Coffee Company, Sleepy Eye Brewing, Powerhouse Nutrition, antiques shops, a VRBO (vacation rentals by owner) and a simulated golf project.

“Millennials, the people in their 20s and 30s, are interested in these businesses,” Kramer said. “A major economic development issue has been the availability of a workforce. Over the past 10 years, we’ve had a return to Sleepy Eye of 50 or 60 young professionals, who have taken an interest in purchasing and rehabbing old buildings. They are making an investment, both financially and nonmonetarily in the future of the community. With the revitalization of downtown, there’s a sense of community. I think that’s why we have an influx of people in their 20s and 30s, mostly returnees, and they bring a spouse. Two of our new doctors grew up in Sleepy Eye, and a third one is a spouse. We have five doctors and one surgeon in our community, all part of the city-owned and very successful Sleepy Eye Medical Center.”

After being hired as the EDA coordinator in 2009, Kramer took some economic development courses at the University of Minnesota, Duluth. More importantly, he read a book titled “Flip This Town,” written by a consultant, Ron Drake. Kramer was so impressed with what he’d read that he shared his views with the community’s decision-makers. As a result, Drake was asked to visit Sleepy Eye in 2018 and to provide his expertise to the community. After spending a few days in town, Drake presented his thoughts to the community in an event that more than 200 people attended. It was that presentation that triggered more activity downtown, including the rehabilitation and revitalization work.

This interest resulted in the establishment of the Downtown Revitalization Committee, which developed building standards that promote maintenance and preservation of a building’s historic relevance and appearance. Ten buildings on Main Street have had rehab work done and now house new businesses.

Another issue the Sleepy Eye community must address is one that many other Minnesota small cities share – a lack of appropriate housing. Kramer explains, “We need more housing at every income level. One solution is that people are rehabbing the living quarters above the stores on Main Street and living there (as was the custom in past generations). These apartments can provide housing for a single person or a couple with no kids.”

One catalyst for the redevelopment of the downtown area was the creation of Veterans Memorial Park. Kramer says, “Ten years ago, four buildings, side by side, were demolished, resulting in 100 feet of street front property being open. No one was interested in building on it, so we sent out a survey about the possibility of having a Veterans Memorial Park. The response was overwhelmingly positive.” The result was construction of a black granite memorial wall, which includes the names of people from beyond the community, as well as a special monument for the local 13 veterans who gave the ultimate sacrifice–from the Civil War to the present, along with other military memorials. With input from the EDA board, Kramer designed the park and its contents, and it was funded nearly 100 percent by donations. There also has been a pocket park development at the corner of Highway 4 and Highway 14.

Kramer points out that Sleepy Eye has a good mix of established businesses and new enterprises. He says, “In addition to the new businesses, we have a well-anchored business community, which also serves the agricultural sector. We have two implement dealers – Kibble, which sells John Deere, and Miller Sellner, which sells Case/IH and snowmobiles. The Central Region Cooperative, which has a long history of serving agricultural producers, employs 160 people.” Other businesses include BIC Graphics, the largest calendar producer in North America, which employs more than 500 people during its peak season in late summer and early fall. Another company that markets nationally is Sensory Effects, a producer of flavored food powders. The Mark Thomas Company produces funeral home products, including printed, wood and pottery items. There also are three assisted living and elder care facilities. The hospitality and tourism industries are represented by the AmericInn and the Sleepy Eye Event Center, the latter drawing visitors from across the nation to the community.

Kramer points out, “We are in good enough shape as a city that we paid cash for the event center, with the Sleepy Eye Medical Center and the Public Utilities Commission helping to finance the center. The city purchased and demolished the Inn of Seven Gables, a hotel that had been on that site. We then built the new hotel and event center on the property.”

Another former entertainment venue is the Orchid Inn, a name that may evoke readers’ memories of dancing the night away. More recently, the property had an EDA loan on it when the owner passed away. Kramer says, “The building needs much repair, and we are working on selling it, either to be renovated or to be demolished. We want to see a plan from the potential purchaser.”

The community also has a weekly newspaper, the Sleepy Eye Herald Dispatch, and a radio station, SAM107.3FM, which is associated with KNUJ in New Ulm.

Kramer thrives on the diverse activities and accomplishments of his town. He says, “I enjoy the Sleepy Eye business community and its owners. I enjoy the small-town atmosphere and the pride most everyone has in the community. I have a passion for keeping our community thriving, moving forward and being successful. I’m impressed with the number of young people returning and making an investment for the future of the business district and the community. For the millennials, the return on investment is not going to be in dollars. It will be in the reinvestment in the community because they have a love for the place in which they grew up.”