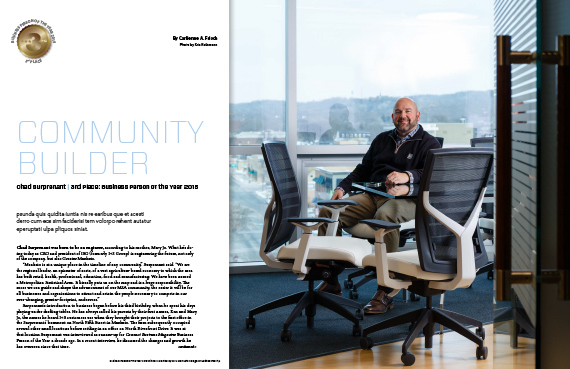 Born and bred into the business, Mankato entrepreneur connects with community, company, and colleagues.

Chad Surprenant was born to be an engineer, according to his mother, Mary Jo. What he’s doing today as CEO and president of ISG (formerly I+S Group) is engineering the future, not only of the company, but also Greater Mankato.

“Mankato is at a unique place in the timeline of any community,” Surprenant said. “We are the regional leader, an epicenter of sorts, of a vast agriculture-based economy to which the area has built retail, health, professional, education, food and manufacturing. We have been named a Metropolitan Statistical Area. It literally puts us on the map and is a huge responsibility. The more we can guide and shape the advancement of our MSA community, the easier it will be for all businesses and organizations to attract and retain the people necessary to compete in our ever-changing, greater-footprint, endeavors.”

Surprenant’s introduction to business began before his third birthday, when he spent his days playing under drafting tables. He has always called his parents by their first names, Ken and Mary Jo, the names he heard I+S customers use when they brought their projects to the first office in the Surprenants’ basement on North Fifth Street in Mankato. The firm subsequently occupied several other small locations before settling in an office on North Riverfront Drive. It was at that location Surprenant was interviewed as runner-up for Connect Business Magazine Business Person of the Year a decade ago. In a recent interview, he discussed the changes and growth he has overseen since that time.

“In 2004, our company was owned 78 percent by Surprenants; now there are 20 shareholders,” he said. “When Ken was diagnosed with cancer in 2008, he retired (and passed away in 2011). Mary Jo essentially retired in 2008 as well. I’ve been the only Surprenant here since then. When I was interviewed by Connect Business Magazine 10 years ago, we had 60 employees, two offices, both in Minnesota, licensing in five states, no acquisitions, and $5 million in revenue,” Surprenant said. “Since 2004, we have been named three times to the Zweig White Hot Firm list, recognizing the 100 fastest growing firms in our industry—once pre-recession and twice post-recession.”

With significant organic growth and the acquisition of two other companies, including Mankato-based Paulsen Architects in 2013, ISG now employs 160 people in seven locations in three states, and has annual income of more than $20 million. ISG provides a spectrum of services, including architecture, engineering, land surveying, landscape architecture, environmental services and planning. In 2009, ISG led the way for other businesses considering Mankato City Center as their corporate headquarters. Occupying several floors, ISG is the largest tenant in the U.S. Bank Center in Mankato.

“Our business efforts go well beyond the greater Mankato area,” Surprenant said, “but I’m more involved than ever in the local economy. My activities on various boards are not place-holding volunteer efforts. I have been on the board the entire time as Greater Mankato Growth made significant strides in combining the Chamber of Commerce and Greater Mankato Economic Development. Serving on the MSU Civil Engineering Advisory Board, I’ve seen the civil engineering program go from inception with an inaugural class in 2003 to graduating classes in the order of 25.”

Surprenant’s involvement with the Mankato Area Youth Baseball Association includes making a substantial donation, along with other Surprenant family members, to the Community Fields, with naming rights on one field in honor of his father. While he served on the Mankato Golf Club board, the club was annexed into the City of Mankato, built significant capital improvements and renovated its course.

In 1993, with a civil engineering degree from Iowa State University in hand, Surprenant interviewed with several companies, listing on his resume the summer work he’d done for I+S. His inquiries resulted in several job offers. Then, his parents took him aside and told him, “There’s an opportunity for you here.” He doesn’t recall feeling any pressure, so “at age 23 I weighed out the pros and cons. More responsibility with I+S, but not as much exposure on how to do things. I decided just to keep my eyes and ears open as to how other companies did things.”

To complement his father’s problem-solving skills and his mother’s financial expertise, he focused on growing the company. He officially became CEO in 2001, already having served as defacto CEO for several years. He soon added “and Architects” to the name “I+S Engineers,” and in 2008, chose the more generic “I+S Group.”

“We don’t want a name that may eliminate us from a project,” Surprenant said, “but it was tough for me to retrain my brain after 40 years.” Following the acquisition of Paulsen Architects, Tami Norberg Paulsen was named Director of External Relations and morphed the company name to ISG. Of the company’s 160 employees, 20 are shareholders, including seven board directors.

Surprenant said his management style was to “trust my gut instincts. I have a partner with an MBA in our LaCrosse, Wisconsin office, who tests my gut with black-and-white logic and math. We work pretty closely on business aspects. I put myself in the client’s shoes, assess if our approach is the right approach. We always try to give the client three options, including the one they asked for. I review the design and the ideas, occasionally playing the devil’s advocate.”

Surprenant uses an engineering approach to management and leadership, saying, “There’s not necessarily a textbook for problem solving people issues. You have to determine the variables in the problem and decide how much weight you’re going to give each variable, recognizing that whatever you’re doing might not be all positive. It looks like an equation.”

Surprenant’s extensive experience is part of many equations. He said, “I’ve done nearly all the jobs, including survey crew, some drafting, design and calculations, report writing and seeking possible sources of funding. My very first job, when I was five or six years old, was feeding vellum drawn plans into a blueprint machine. It had an ammonia process, and it stunk. I’d stand on a stool and feed those plan sheets non-stop.”

He continued, “At about 14 or 15, I did a bit of surveying. When I got my driver’s license I delivered blueprints and specs. I really liked going here and there, including the Twin Cities. I always liked the mystery of it all. During summers in college, I did structural calculations and construction inspection work. I learned what’s practical in the field.”

“Ken was a dreamer, but very goal-oriented in reaching those dreams,” he said. “Mary Jo resisted change even though she’s very intelligent and capable. When I came on board, I broke up their tied votes. I like change, and we’ve done a lot of it, but sometimes I feel like I’m lazy about not changing more. I don’t really miss being an engineer because I view management issues as engineering problems of sorts.”

Numbers tell the story of change, with the company growing over the past two decades from 10 to 160 employees and clients increasing from about 50 to “well north of 1,000, the majority long-term,” according to Surprenant.

Clients include municipalities, agribusinesses, civic and cultural organizations, commercial businesses, and educational institutions. ISG is designing a new public school administration building in Faribault, a master plan for the parochial school system in LaCrosse, expansion for the middle schools in Mankato, projects at Minnesota State University-Mankato, athletic facilities throughout the Upper Midwest, and is doing pre-referendum conceptual planning for St. Peter High School.

“There has been a fundamental shift in how we do business,” Surprenant said. “Firms like ours used to be geographically centric, picking up a large percentage of business within a driving limit of 90 minutes. In the mid-2000s we became a client-centric firm, opening a Faribault office to provide leadership and growth opportunities for employees. We searched for clients that would have multiple projects. All of a sudden we were saying ‘no’ to some projects we would have chased blindly before. The recession forced us to implement our new strategies, which made us come out of the recession a much stronger and better firm. Now we chase clients, not projects. We do everything in house, but strategically partner with other firms at times. We compete with people all over in various arenas—architecture, engineering, etc. We’re licensed in 30 states. People hire us for many reasons, but not to tell them something cannot be done. When something heats up in a market trend, we’re usually ready to go with services we can provide.”

For Chad Surprenant, life has always been about the business. His mother, Mary Jo, said, “When Ken and I began the business in March 1973, Chad, who was going to be three years old that April, came to work with us. He did literally grow up under the drafting tables.”

The three older Surprenant children were in school by then and missed out on the day-to-day experiences of the new enterprise. None chose to be involved in the company. Gregory is a technical writer, Margaret is vice president of a financing company, and Theresa works with university student job placement.

The story of how the company came to be rolls off her tongue, along with family history. “Ken was a very, very hard worker who liked doing his own thing his own way,” she said. “He liked the challenge of something new and different. We farmed with his parents for a couple of years after we married in 1960. Ken, who had just gotten out of the U.S. Army, went back to school on the G.I. Bill to study mechanical and electrical engineering at Mankato State University and the University of Minnesota. Then he farmed and worked for the Murray County Highway Department, developing an interest in civil engineering. Unable to get a loan to improve and expand the farm, we decided Ken would finish his degree at Iowa State University in Ames. By then we had three children.”

Mary Jo worked as a quality controller on the night shift assembly line at an Ames electronics company that assembled parts for electronic subpotentiometers. She continued, “Ken worked as a janitor, then as a tester in the structural engineering department on campus. He was offered a research position and an invitation to get advanced degrees, but with three children, he wanted to make some real money.”

Returning to Mankato, Surprenant worked as a civil engineer for a local firm, eventually accumulating the work experience required for taking the engineering exam. His work on sewage treatment facilities left his family with an unusual legacy.

Mary Jo recalled, “On all of our vacations we had to see how communities handled their waste treatment. We visited aeration ponds, and when possible, toured the entire facility. The girls and I were sent into women’s restrooms to see which brand of fixtures were used—American Standard, Kohler or Eljer.”

When Gene Isakson, who had both engineering and sales credentials, approached Surprenant in 1973 about starting a business together, I+S was formed as an engineering company. Within a year the Surprenants bought out Isakson, who had decided to perform county engineering duties. For continuity’s sake, they chose to keep the name that incorporated the initials of both founders’ last names.

When 23-year-old Chad joined I+S in 1993, shortly after earning an engineering degree, he’d already had 20 years of involvement in his parents’ work. He quickly assumed management and leadership responsibilities.

Mary Jo recalled, “Chad was always very interested in going out with Ken to check structures, and he was fascinated by bridges. Before he could read words, he could read numbers, so he planned our vacation routes on maps. When he was in elementary school, he planned one trip to include as many bridges as possible.”