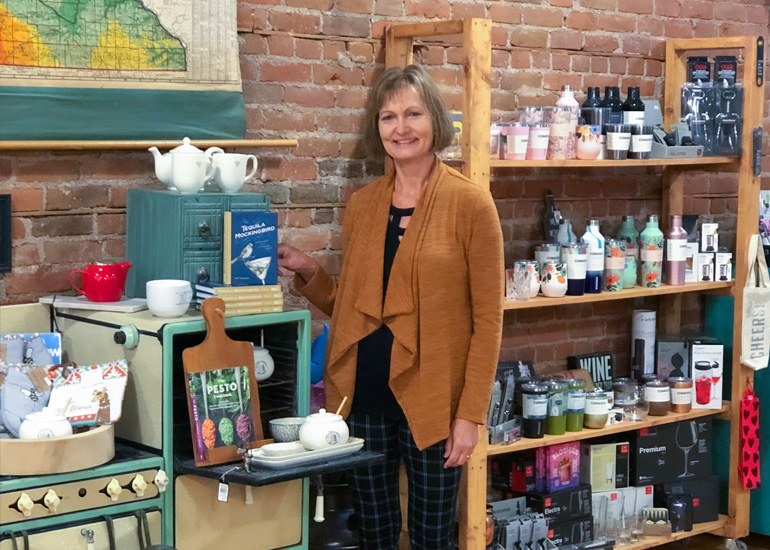 Ever since she was little, Lynette Lusk had a love for old buildings. She loves the architectural design and found beauty even in the buildings that had been left to sit, without their true characteristics shining through. When the building in downtown Jackson that formerly housed a Hallmark store came available, she saw her opportunity.

“I truly wanted to bring an ugly building back to its original 1890’s design, and make a fun and unique place for people to enjoy and also give them a place to purchase gifts,” Lusk says of her store, Virginia & Company, named after her mother who had passed away.

Lusk grew up in Jackson, so she is familiar with what the area has to offer. With a background in the medical field and the customer service industry, she has worked with people of all different backgrounds and interests. This gave her a great view of what many different people might want.

Jumping In Feet First
With a desire to open a small gift shop, Lusk was always on the lookout for new ideas, but she never really knew if she’d do it. She talked about opening a store for years, and one day a close friend told her to just do it.

The store opened to much anticipation on May 16, 2016 and has since blossomed into something much bigger than she had anticipated. The plans were to have a small store, but once she took on the location and gutted the space, she realized how much room she truly had. The store is at least double the size she’d imagined, but she has managed to keep it full of all sorts of odds and ends.

Minnesota First
If someone were to describe Virginia & Company, they might say that it has something for everyone. Lusk said that she had the idea to make it similar to an old fashioned mercantile where people could buy gifts for others, but also things for themselves. She has clothing for women, also a few for babies and toddlers, socks for anyone who could want them, chocolates, books, puzzles, dishes, kitchenware, jewelry, a great selection of kid’s toys and books, dish towels, cards, pens, journals, and so much more. There truly is something for everyone in Virginia & Company.

One of the main things she works on, is keeping items in stock that are made locally or regionally. Sure, there are some items that come from farther, but many of her items come from makers, artists, designers, and more from the area. She supports the local artists, and loves displaying items from people right within Jackson County. She has also worked to keep things from the state of Minnesota in stock.

Lusk also finds it important to give back to the community, and often participates in fundraisers through donating items for silent auctions, or even holding specials where a portion of her sales go to local non-profits such as a local animal rescue and the local food shelf.

Small Business Struggles
While owning your own business and filling it with all sorts of fun things sounds like a dream job, it does not come without its fair share of struggles. While Lusk has the option to bring in anything she wants, this is also hard many days.

“I run the store alone,” Lusk said. “You can’t leave for long amounts of time. Even though I have some great staff members, if something breaks or needs to be fixed, I have to do that.”

She also has to make all business decisions on her own, find time to take care of all aspects of the business from purchasing stock, keeping up with inventory, meeting with vendors, maintaining hours, and all of the little things that many people forget about, as well as attempt to find time for herself and her family.

Word to the Wise
Within the store there are many books, calendars, even wall décor that have quotes on them. One that Lusk really liked was an Assyrian proverb that states: “There is no shame in not knowing. The shame lies in not finding out.”

This was a big part of why she decided to open Virginia & Company. She knew she wanted to take that chance and find out what it would be like. She said that anyone considering opening their own store should know that if you just keep talking about it, it won’t ever happen. You have to take that step, accept the risks, and just do it.

Another piece of information she said for those considering doing something similar is to know that you won’t be able to pay yourself for quite a while. Starting a business is costly, and while it is a labor of love, it’s also a financial leap. Slow and steady is the best way to grow, but it starts at a cost that may not be returned for quite some time.

Moving Forward
While starting a business is a lot of work, Lusk has enjoyed it. She said the best thing you can do for yourself is to surround yourself with positive people. Those who have your best interest at heart and are not looking for personal gain. Those are the people that have pushed her along the way and been beside her to keep things moving. Her plans for the future are to build up and continue to maintain the historic integrity of the building she is located in, and to keep the business moving, slow and steady.