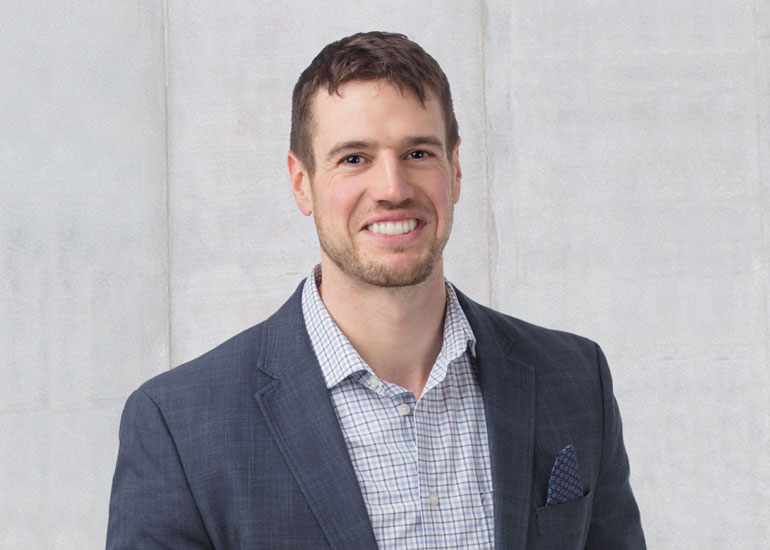 More Than A Concrete Company, Wells Remains A Strong Foundation For Community

Their work is all around us. You’ll see it, although you probably won’t be looking for it, in the Johnson Outdoor building in Mankato, in the beautiful Blue Star facility in upper North, and in the inviting halls of The Creative Company. Wells Concrete is responsible for much of the precast concrete work going into Mankato’s building industry.

Wells Concrete was founded in Wells, Minnesota, in 1951. Although the company is now headquartered in Albany, Minnesota, it remains firmly cemented in southern Minnesota, even as its footprint keeps getting bigger and bigger.

“Mankato has always been very good to us. When a building is going up, it’s always specified to be precast,” Greg Roth said. Roth is president and COO of the Wells Concrete Midwest division. “Our clients continue to choose us because we have a reputation built on customer relationships and doing the right thing.”

That culture of “doing the right thing” has helped the company grow beyond its Wells roots. Over the last seven decades, the precast company has grown its services, its number of employees and its reach, earning a reputation that makes it one of the top five companies in its industry in the nation.

“The thing that has always rung true, no matter the issue or the situation, is let’s do what’s right first, then figure out what happened after. That is true internally, as well as externally,” Roth said. “Because at the end of the day, when we sit down to hash it out with a client, you don’t want them to feel let down. Even if it is an internal conflict, we handle the issue now, then we figure out what happened, how it went sideways and make sure it doesn’t happen again. At Wells, it’s always been a culture of it’s okay to make a mistake, as long as you don’t continue to make that mistake. In the end, we want people to know we care, we didn’t try to downplay the issue, we made it right and moved on. We keep people happy, even if there are financial implications for us.”

Along with its headquarters in Albany, the company still has a plant in Wells, as well as facilities in Rosemount, Minnesota; Denver, Colorado; Valders, Wisconsin; and Crystal Lake, Illinois. Wells designs, manufactures, and installs architectural and structural products for architects, building owners, developers, and contractors from Canada to New Mexico and Indiana to Colorado. Its footprint has been growing steadily for the last decade, primarily through acquisitions — notably Hanson Structural Precast, formerly in Maple Grove; Spancrete in Wisconsin and Illinois; and Rocky Mountain Prestress in Colorado. Enveloping these companies allows Wells to work on projects in the commercial, education, food processing, health care and manufacturing markets. It is also involved in municipal projects, including parking ramps, stadiums and arenas. 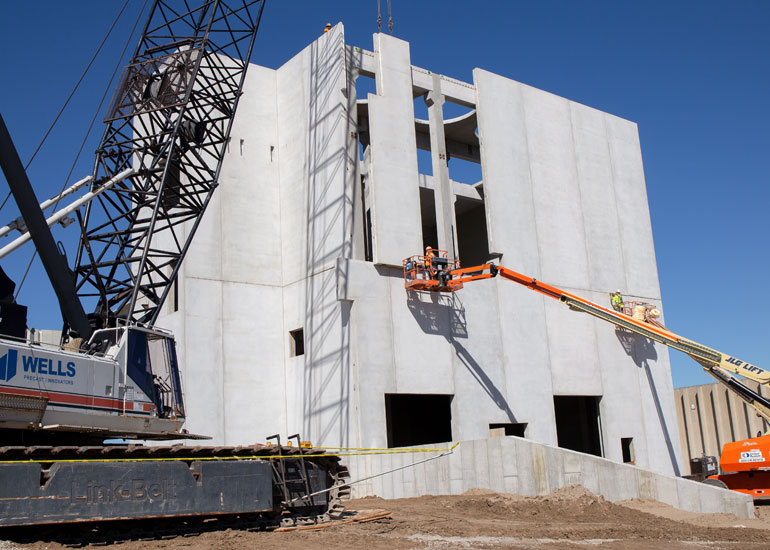 “All of the acquisitions we’ve made have been based off of our values. We pay attention to how they want their employees to be treated. That has been the resounding theme with every acquisition,” Roth said. “Through growth and acquisition, we have put ourselves in the position to dominate the markets we are in and continue to be the building solution provider of choice.”

Helping to manage the growth, Wells went through a restructuring earlier this year. It updated its organizational structure to provide strategic strength, while also allowing for regional independence. Centralized functions of the business, such as finance, human resources, marketing, engineering design and information technology, will be managed by Wells corporate services, while each region of the company and its operations will be led by a divisional president and COO. With the company for almost a decade, Roth was tapped to lead the way in our region. Part of Roth’s charge is to manage the Wells Concrete facility in Wells, an operation the company is making a sizable investment in.

“We are in the midst of investing more than $6 million into the Wells facilities,” Roth said.

“It’s going to be steady investment there from a capital standpoint to get things back to where they should be,” Roth said. “This year it’s the batch plant. Next year will be what we call yard improvements, where we want to transition out of cranes to a Mi-Jack system for the yards.

“Right now, the Wells plant is 70/30 structural building components versus architectural. The investment is focused on facility flexibility. Investing in batch plants and yard operations allows our plant and employees to be able to adapt to changing market conditions, a variety of product offerings and evolving client needs, creating stability and growth opportunities for the community and our local labor force.” 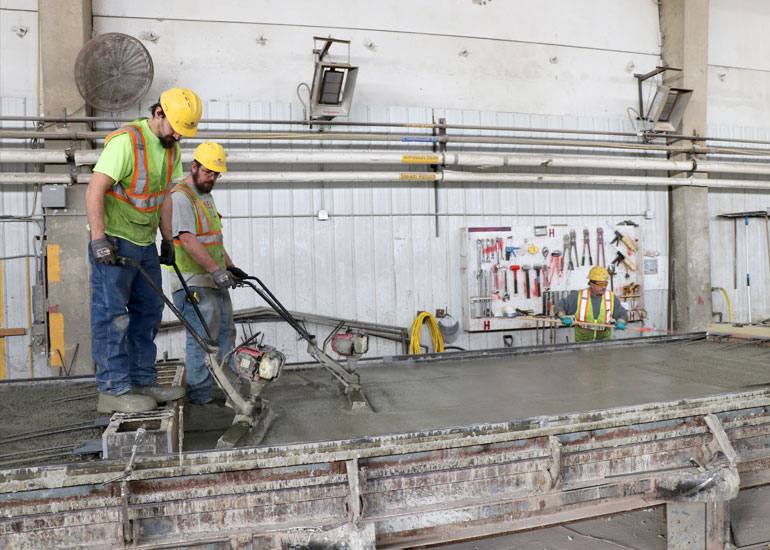 The investment in the Wells plant shows its importance to the ever-growing company.

“Lead times are going further and further out for architectural products. For structural it is really cyclical and is hit or miss. So naturally, we are trying to develop the total precast market so it is more balanced. We can’t really control what the market is going to bear, so that’s really the big reason for the batch plant investment in Wells.”

“Say we’ve got a 500-foot structural bed, which will take three architectural forms, so we’ll need three times as many people to make it,” Roth said. “So, the plan is to grow in Wells over the next five years.”

Roth said over the years Wells has been a great city to do business in.

“The community of Wells is very good about whatever we need, always open to helping us out and helping us get to where we want to get to,” Roth said.

While Roth sees great opportunity in the future, he knows there are challenges ahead. They’re the same challenges echoed by others you read about in these pages: labor and supply chain.

“We are always needing more labor,” Roth said. “Whether it’s general labor, carpenters, drivers — if someone wants to be a part of our culture, we’d love to talk to them about what they want to do. We have a lot of employees that grow in the company. They might come in day one as a general laborer, they transition to finishing work, or even go out in the field. It is a company you can grow in, that’s for sure.”

While still a challenge, the supply chain is a little more manageable.

“We’ve done a very good job — and this is where I get to brag up our team a little bit — we’ve done a good job of forecasting material needs, so we haven’t had as many issues with run of the mill stuff like steel, aggregate, things like that that we really need to make the panel. It’s when we start into the custom job stuff, liners and other specialties that make the nice features, that’s where we are kind of at the mercy of the vendor. We’ve had a couple of those where we’ve gotten letters, just like everyone else has, so just be patient. What makes it hard is that we’re kind of in the middle. The customer wants a feature, and they bought it, but we can’t produce their panel without that piece that we can’t get. So, we are definitely feeling the squeeze from both sides,” Roth said. “But that’s nothing out of the norm. Lead times are just a little longer.”

In total, Wells now has 1,400 employees. Its growth is built on the company’s original foundation: making the customer happy.

“We love a challenge,” Roth said. “But at the end of the day, we all work toward one thing: making sure everyone is happy and safe. It’s always been relationship first, business second at Wells. It’s the thought of, if you take care of people, chances are the economics will work itself out.”

Greg Roth was named president and chief operating officer for Wells Midwest in February 2020. As divisional president, Roth has full responsibility and authority for revenue growth, operations and performance of the Midwest division.

Roth has been with the company for 10 years and has had several roles, most recently as vice president of operations responsible for companywide production and yarding operations. He lead the implementation of Concrete Vision, developed many of the metrics used to drive continuous improvement, and has been instrumental in building teamwork between quality and operations to drive performance.

Roth holds a Master of Science degree in executive leadership from St. Cloud State University and an undergraduate degree from the University of Minnesota Morris. His path to Wells Concrete was a little unusual. He remembers meeting Wells CEO Dan Juntunen over happy hour.

“The first time I met Dan it was actually socially. Before I worked at Wells, I was working for a small investment firm in St. Cloud. The whole goal of the firm was to grow the family wealth, so they looked for businesses that were $5 million and under. They would invest capital or talent into the business to help it grow,” Roth said. “So, I did that for an internship then eventually came on board with a company they bought. It was a small $2 million IT services company, and that is where I met Dan’s wife. Through her, I met Dan socially a couple of times and this was just after he became interim president at Wells. So, it was a happy hour, and we were just drinking. He was talking about things he wanted to do at Wells, and it was about centralizing services.”

Roth remembers discussing Juntunen’s ideas and offering a few of his own.

“I gave him advice on three things: I told him one thing that would work, one thing that wouldn’t work and then what I would do differently,” Roth said. “So, six months go by, and I saw him at another happy hour. He said, ‘Admittedly, when I first met you I thought you were a great kid, but what do you really know? But you were three for three.’ At first, I didn’t know what he was talking about. But then he told me the three things I told him turned out just like I said they would!”
It turned out that happy hour conversation made a big impression. Eventually, it led to the start of Roth’s career at Wells.

“This was in 2011. He invited me out to the Albany plant, and I did a tour at 5 in the morning before my workday. When I got back to my office at 7 a.m. I had a job offer waiting for me.”
Roth’s early work focused on finding synergy between independent Wells’ facilities and leveraging that to create more options for Wells’ customers.

“Back when I first started it was just the three plants in Minnesota,” Roth said. “And at the time they were operating as three independent plants. I came in to help leverage the three plants to operate as one, and that was from materials to schedules and standards. It enabled us to offer more, so instead of saying this is what you get when you buy from Wells, we can now say here are the details you can pick from. Because at each plant equipment is different, people are different.

We’re trying to leverage the strength of each facility, but still provide flexibility and quality for our customer base.”

His efforts paid off. In 2020, Roth was promoted to his current position: COO of Wells’ Midwest division.